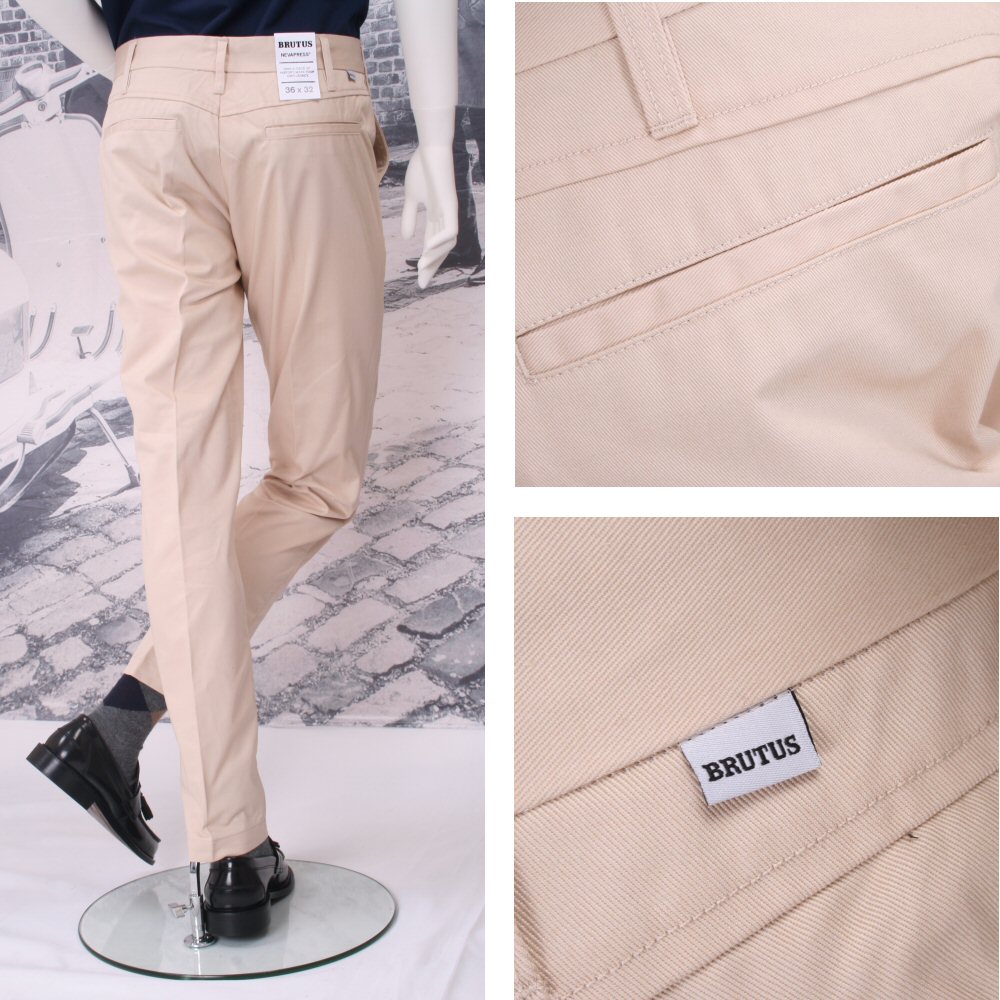 A year ago, I announced the reissue of the ‘iconic’ 1966 Brutus NevaPress on this blog, concluding, “If they hold that crease, they might just be perfect”. Now that I’ve owned a pair of navy Brutus NevaPress for a year, it is high time I pass a verdict.

My trousers came in a very neat shade of navy, and the quality of the material seemed decent enough. 70% polyester and 30% cotton – probably no different from the much lower-priced Warrior or Relco trousers, but somehow, they seemed sturdier and more solidly finished, leaving a good first impression.

As is the case with sta prest trousers from Jump the Gun, Warrior and Relco, one needs to size up: if your usual jeans waist size is 32, pick W34, and so on.

Even so, they are very slim fitting – and I’m saying this as someone of slender build. Are they exact replica of Brutus’s 1966 trousers, or is it because they’re a modern variation? And were the ‘legendary’ NevaPress really as tapered as these? The hem barely measures 6.25’.

Who knows, for who has ever seen an original pair? Either way, they resemble something the Beatles (or maybe Small Faces) might have worn in 1966 more closely than what skinheads sported circa 1969. Given that Brutus are banking on their crophead heritage, why produce such moptop wank?

Moreover, at a bare 10’ the rise is too low. That’s probably cool if you’re a hipster who likes his ‘sick retro threads’ adjusted to modern sensibilities. It ain’t so cool, though, if you want to tuck your shirt in. Now, Brutus shirts, neat and trim though they may be, are just a tad short even if you wear higher-waisted trousers. The one time I hit the street decked out in ‘double Brutus’, I walked back home and got changed after a vain 20-minutes struggle to keep the shirt tucked in. You’d think Brutus produced matching garments – but, as Uncle Scrooge would surely agree, every inch of material saved is a penny earned.

I laundered my pair of NevaPress in cold-water handwash mode. Two or three washes reduced the 32′ inseam to 31′ only, and the trousers had become so tight the crease was rendered virtually pointless. Why, I wasn’t aware ‘shrink to fit’ sta prest existed – although ‘shrink-wrap’ would probably be a more apt description here. After a year of very infrequent wear, the first open seams began to show.

At £55 a pair, one may wonder if NevaPress are manufactured by workers earning whatever passes for a minimum wage in Britain these days? No such luck – they’re ‘made in China’. As western entrepreneurs from Apple to Dr Marten’s know, Stalinist-Dengist management methods are very effective at pushing cheap labour force to the limits of what’s physically endurable.

For me, the final straw was the fact that Brutus use DHL for deliveries. Good luck with that, folks! I’ve never not had problems with DHL. To save money, private couriers tend to employ very few drivers condemned to handle more deliveries than they can. Consequently – and understandably –, they might tick you off as ‘not in’ or ‘delivery attempted’ without actually having called at your place.

With some luck, you’ll get your parcel in the end. Sometimes you won’t. Once, I ordered a mobile phone. DHL handed it to the teenage gang that used to hang out in the hallway smoking weed and ticked it off as ‘left with neighbour’ – well done!

Brutus charge £5.50 UK postage. For that money, they could frankly afford Royal Mail. But no – not Brutus, the DIY ‘common man’ company with the scene-friendly image.

Except Brutus’ managing director, Jonathan Freedman, is far from being a man of the people. Rather, he is a multi-millionaire property magnate who owns 1000+ flats in Berlin alone – especially in “up-and-coming neighbourhoods”, read: gentrification hotspots such as Neukölln, from which working class people are being priced out as we speak.

Jonathan enjoys reading Noam Chomsky when travelling between Berlin and London, as the fashion website Hypebeast informs us. Alas, his taste for radical literature doesn’t stop the Freedman property empire from firing employees who ask why they aren’t offered a pension scheme.

You thought Brutus was a small company that closely identified with skinhead culture? Well, they do use ‘faces’ like Jenny Woo and Sid Ryan of Grade 2 to model their shirts (do they pay them?), and they have promoted a couple of Oi festivals with very decent bands in Camden. While Brutus may present a somewhat sanitised picture of skinheads, their marketing strategy aims for ‘street credibility’ rather than glosses over the boots & braces connection.

From what I hear, though, not every skinhead who has collaborated with Brutus was impressed with the company’s ‘generosity’ or ‘trustworthiness’, but these are anecdotes best told by people who have dealt with the company first hand. After all, Brutus may well send their expensive ‘skinhead lawyers’ for me if I write things I don’t know for sure.

Back to trousers, though. Brutus NevaPress are best avoided and certainly not worth the price. The best sta prest I have found so far aren’t sold by mod or skinhead outfitters, but are available from a traditional gentleman’s retailer whose flagship store is based in London’s Jermyn Street. Charles Thyrwitt’s ‘flat front non-iron chinos’ are made of 100% heavy cotton and available in various fits, lengths and colours.

For an authentic late 60s to early 70s look, I recommend you pick ‘slim fit’ (but not ‘extra slim fit’) and go one up from your normal waist size, which will give you a more classic silhouette than seen in the picture below (and, of course, more leeway for braces-induced waistline enhancement and boot visibility). The ‘silver grey’ version on offer closely resembles the off-white Levi’s Sta Prest seen in original period pictures. A neutral tone that doesn’t contain a hint of beige, it’s versatile and easy to combine with other colours.

Unlike Brooks Brothers’ inexplicably popular Milano Fit Chinos, which are more than twice the price, Charles Thyrwitt’s trousers have a traditional high rise. In the quality department, I’d say they’re pretty damn close. 1969 fundamentalists won’t like the absence of buttons on the back pocket, but I can live without that detail.

CT non-iron chinos will cost you the same as Brutus NevaPress, but the quality and fit are far superior. Of course, I’m not going to pretend that Charles Tyrwhitt (aka Nicholas Wheeler) is just a ‘regular bloke’ who runs a small company and loves skinheads. But then, neither does he.