Hailing from the glorious streets of Cork (via Southampton – yuck!) come these streetwise bucks, The Jollars. They play beautiful melodic Oi in the vain of Vanilla Muffins, Guttersnipe and Runnin’ Riot.

I met these fine fellows among the wonderful crowd at the Une Vie Pour Rien gig in Rennes last April. I was most impressed with their grasp of the English language, their dedication to the booze, and the fact that Bob the guitarist looks like Elton John.

I decided to ask them some questions and whore them out on Creases Like Knives. So here we are – enjoy! Oh by the way, we need to get these buggers to do a gig over in the UK. 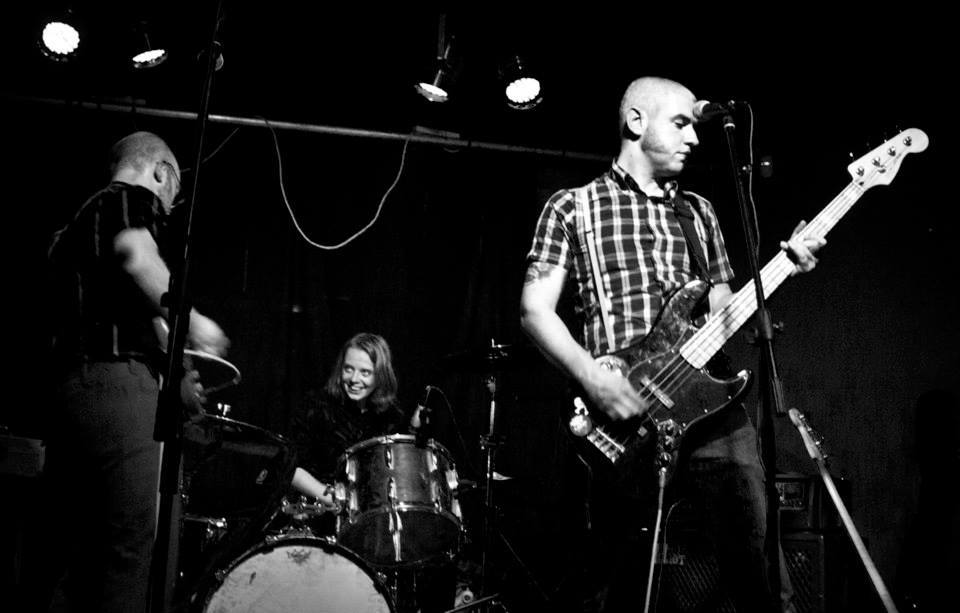 Brian: OK, we’re a three-piece Oi band from Cork City, Ireland featuring me on bass and vocals, Bob on guitar and vocals, and Nora on drums. Brian and Bob used to be in a band called Cruibin, also known as the drunkest band in Ireland. When that wrapped up, the two of us talked about doing an Oi band, something modelled on bands we loved – Runnin’ Riot, The Oppressed, Rejects, Sparrer, and so on.

We also wanted to put on gigs to get bands we liked to play Cork, but there weren’t many punk bands around and definitely no Oi bands. So we had to form a band ourselves just to get someone to fill the support slots… Thankfully, our friend Nora agreed to play drums.

Brian: It’s a slang term for a belly or a beergut from County Mayo, where both Bob and Nora are originally from. I thought it was funny, so that was that, although looking back I’m sure we could’ve done better… We never really thought we’d be playing outside of Cork, let alone Ireland, or release an album.

The Irish scene seems to be really healthy. Great people, and friendly too. How do you think it compares to the UK scene?

Brian: Nah, we’re not healthy, we live on stout and rollies! Glad you’ve had a good impression of the Irish scene anyway, if at least the folks you meet are welcoming we must be doing something right.

I suppose because Ireland is quite small, everyone sort of knows each other. There’s usually a good atmosphere at gigs wherever you go. As for where’s the busiest, it comes and goes in waves in each region. Cork was hopping a few years ago; Galway had loads of gigs in the early 2000s; and so on.

Dublin seems to be going great at the moment, and Belfast is always great: check out Aggressors BC, 1000 Drunken Nights, Takers and Users, United Bottles. There’s also places outside of the main population centres such as New Ross and Wexford, where our mate and official tour driver Conor puts on gigs.

Bob: And of course, Ballina, County Mayo where another Conor Hickey and the Ballina Punx crew are keeping the flag flying. I used to live and put on gigs there years ago. It’s still hilarious to us that loads of bands have done an Irish tour that looks like ‘Dublin, Belfast, Cork, Ballina’. We should give a special mention to the GGI Fest, which rotates between Glasgow, Groningen and Ireland – hence the initials – and is in Ireland again this year. We’ll be playing and getting steaming drunk with many great bands and great mates.

Brian: As for the UK scene, we don’t really have much experience of it. I used to go to ska fests and to Rebellion years ago.

Bob: I played there a few times with Section 4, an Oi and reggae and ska band from Ballina. That’s about it. We’ve never played in the UK just because we’ve never really been asked, plus we’re lazy cunts.

Your new album has a couple of anti-racist lyrics. I can’t picture there being a big problem with racism in Ireland?

Brian: There’s been a rise in racist and anti-immigrant sentiment, same as there has been all across Europe. But in fairness, it’s much less severe here than most other places, Britain included. You will definitely meet the odd racist windbag over here, but thankfully, most people have more sense than to buy into that shite.

Thankfully, the far right in Ireland are a bit of a joke; a handful of one-man-and-his-dog outfits, keyboard warriors. And of course, for comedy value, the anti-immigrant immigrants – i.e. Eastern European fascist cunts. They can’t even get a handful of votes or cunts on the street, and I don’t see that changing anytime soon.

Apparently, though, there was an Irish RAC band back in the day, the poetically named Celtic Dawn?

Brian: Oh yeah! Somehow, we forgot all about them… One great thing about the Irish punk scene is that there’s none of that RAC bollocks, or cunts looking to cross-pollinate… “So what if we played a Blood & Honour festival, why won’t you put us on at your punk gig? Fuck you, commie”, and all the rest of it. As far as we’re concerned, all that wank can get in the bin.

You played a stormer in Rennes. Fantastic venue and top people. What was your experience of that gig?

Brian: Too kind of you! It was our first time playing outside of Ireland as a band, so massive thanks to the Primateur crew, especially Audrey, Berthel and Nounous, who used to live in Cork and played in an amazing band with Brian called Miki-Leaks. They treated us so well, and we had a brilliant time. The venue, Mondo Bizzarro, was great too.

We were a little ropy because with Brian living in England now, practises are few and far between, but we did our best. As for the other bands, Lion’s Law were fantastic, and we all loved the Janitors – real high-energy stuff, they blew us away. And the Outcasts of course were great as always, was nice to hang out with them, gentlemen all.

Another thing that we noticed about that gig was the amount of young skins. You don’t get that everywhere and it was great to see! There was a wave of young skinheads in Dublin a few years back, but sadly, most of them seem to have moved on to greener pastures.

How did you get into the skinhead scene, Elton?

Bob: You talking to me? I snuck in the back door when nobody was looking, so fuck off!

Brian: I got a foot in the door through an older mod friend of mine that I met going to football. He introduced me to a lot ska, early reggae, and punk rock stuff. I started picking up records at a fair that would come to town every few months. I picked up on different bands through reading thanks lists on albums, buying albums from labels that I had taken a chance on, and compilations such as Oi! Oi! That’s Yer Lot. I started out with the usual stuff like the 4-Skins and The Oppressed.

There wasn’t much of skinhead scene in Cork when I was growing up – I had just missed out on quite a good punk scene by being slightly too young. By the time I was going to gigs, most of the protagonists had moved away, but those punks that were still about showed me some great bands and introduced me to a lot of heads.

Going to gigs in Dublin, the lads from Ructions and Skint who I would meet at gigs introduced me to a lot of stuff. That’s when I started to feel I was more part of a ‘scene’ and that I wasn’t the only eejit into this stuff.

How important do you think fashion and style is in the skinhead scene?

Brian: The look has always been part and parcel of it, no doubt about that. But it shouldn’t be the be-all and end-all either. We’re certainly into our style, but at the end of the day, I’d rather have a pint with a sound fella dressed in a bin bag than a well-dressed dickhead.

The prevalence of social media has promoted a certain kind of snobbery or one-upmanship. In some ways, you could say it was always there, but it’s not something that interests us much.

Also, we prefer to support smaller companies making quality gear catering to our scene and our sense of style rather than pay well over the odds for the ‘traditional’ brands. People forget that those brands became skinhead because skinheads wore them, not the other way round.

You’re playing Blackpool in August. What other gigs have you got lined up – any gigs down south?

Brian: We’re actually playing the Dublin Rebellion rather than the main Blackpool one. But as long as we get to play on the same bill as Cock Sparrer, we don’t care where it is.

We’re also playing the festival we mentioned earlier – GGI in August. That’s gonna be mayhem. We’re off to Germany in September, for “MOi!n it’s Hamburg” festival joining  8.6 Crew, Lions Law, Shandy, and Pennycocks. It’s great to be invited to play with such amazing bands.

Bob: We’ll have to try and not make a show of ourselves. We’re hoping to book more German dates over the next month or so. Really looking forward to playing Hamburg, Nora’s dad is from there, and I have some friends over there – Robinson Krause! Wie geht’s? – so should be good craic.

Any new music or propaganda out soon?

Bob: I’m working on my manifesto Up With Pints, Down With Capitalism, which should be available of the back of a beer mat very soon.

Apart from that, we have two songs recorded that will hopefully make up our side of a split with our Belfast muckers, United Bottles. Check ’em out if you haven’t already.

Brian: We have plans to record a second album when all our schedules permit, there’s a good few new songs piling up already…

Last but not least, any words of wisdom?

Brian: As our much-missed mate Colin Riot (RIP) said, “Oi Oi music is working class, anyone can do it if ya give it a blast”. If there’s no scene where you are – start one. If there’s no punk or Oi bands, no ska, reggae or soul DJ nights – do one yourself. Don’t sit around wishing you were somewhere else; make your own town better. Especially when it comes to putting on bands, there are many bands looking for gigs, and if you can offer them food, place to crash and petrol money, I bet they’ll come and play wherever you are.

Oh, and join a union, don’t vote Tory if in the UK or Fianna Fail/Fine Gael in Ireland, and don’t be a racist gobshite. That’s it, cheers