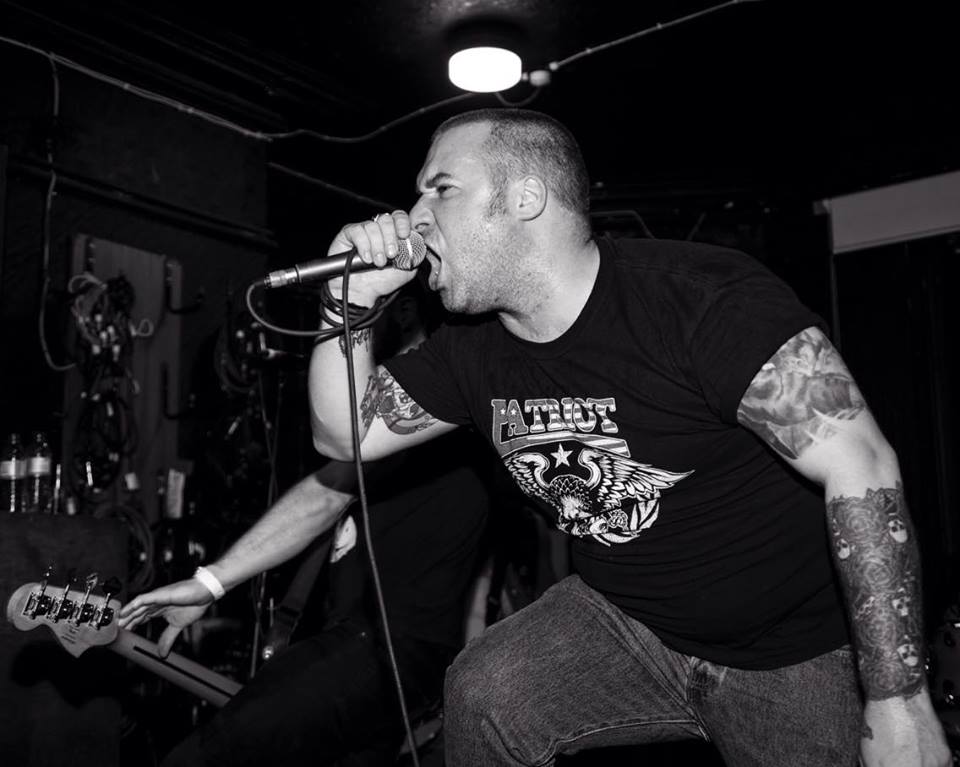 You’ve heard of Lord of the Rings? Well, Scott Maracle is Lord of the Jeans. We had the pleasure of meeting this rock ‘n’ roll troubadour at the Great Skinhead Reunion in Brighton last May. For the uninitiated, the Reunion is an annual get-together that has been slammed by both fascists and anti-fascists. We have no real idea why. To us, it just seems like a friendly, fun and trouble-free event attended by pleasure seekers of different colours and creeds.

But back to Scott Maracle: it was at this year’s Great Skinhead Reunion where his jeans got ripped off by loyal followers. Of course, he needs no introduction (although he actually does) as he sings in Out of Order – the Canadian Oi! kings who snort maple syrup and spend their evenings fighting bears whilst chewing ice. Here he is in his full glory (not naked), interviewed by our Girth.

You guys put in a killer performance at the Great Skinhead Reunion – a fantastic weekend overall. How did you find it?

It was a blast! What a time. Such a positive energy floating around that weekend. So many different people from all backgrounds coming together and having fun and celebrating the subculture they love. We met great friends and had such a warm reception from those who were in Brighton. I don’t think I went without a beer in my hand the entire weekend.

What’s the story behind Out of Order?

We’ve been around for a long time in one form or another. We started off in the early 2000s playing the east coast of Canada. The band has always been an attempt to blend straight punk rock and Oi! music. It’s punk rock; boiled down, with catchy and anthemic backgrounds. We love what we do, and I hope that love transfers to those who get a chance to see us or listen to our music.

There are some good bands coming out of Canada. Bands like Bats Out, True Grit, Tailgunner, Bishops Green, Bourbon DK, The Strike, Chernobyl Wolves and The Kroovy Rookers are all keeping the spirit alive. There is a good strong scene here. We have friends all over the country, support each other and have a lot of fun doing it. There is a lot of new music coming out these days, and we are proud to be a part of it.

What does skinhead mean to you?

Skinhead to me had always been about being proud of who you are and standing up for what you believe in. There are subcultures within subcultures to this movement. To me, it has and always will encompass a broad spectrum of lifestyle. It’s not just some passing trend, but rather a culture you live and breathe everyday. For good or bad, you are who you are, and you must accept that. There is no hiding. We face the reality we are dealt with, holding our heads high.

What music have you got out?

We have a demo, three full-length studio albums and a split 7″ out… Our first self-released album, Written on the Walls, came out in 2010. Our second, Better Days of 2014, is available through 4Subculture Records. Our latest release, Stuck in the Mud, was put out this year on Randale Records. We have an old demo that is floating around and a 7 inch split with the band Gag Order. We have some new tracks we recorded in England coming out soon too, so stay tuned. 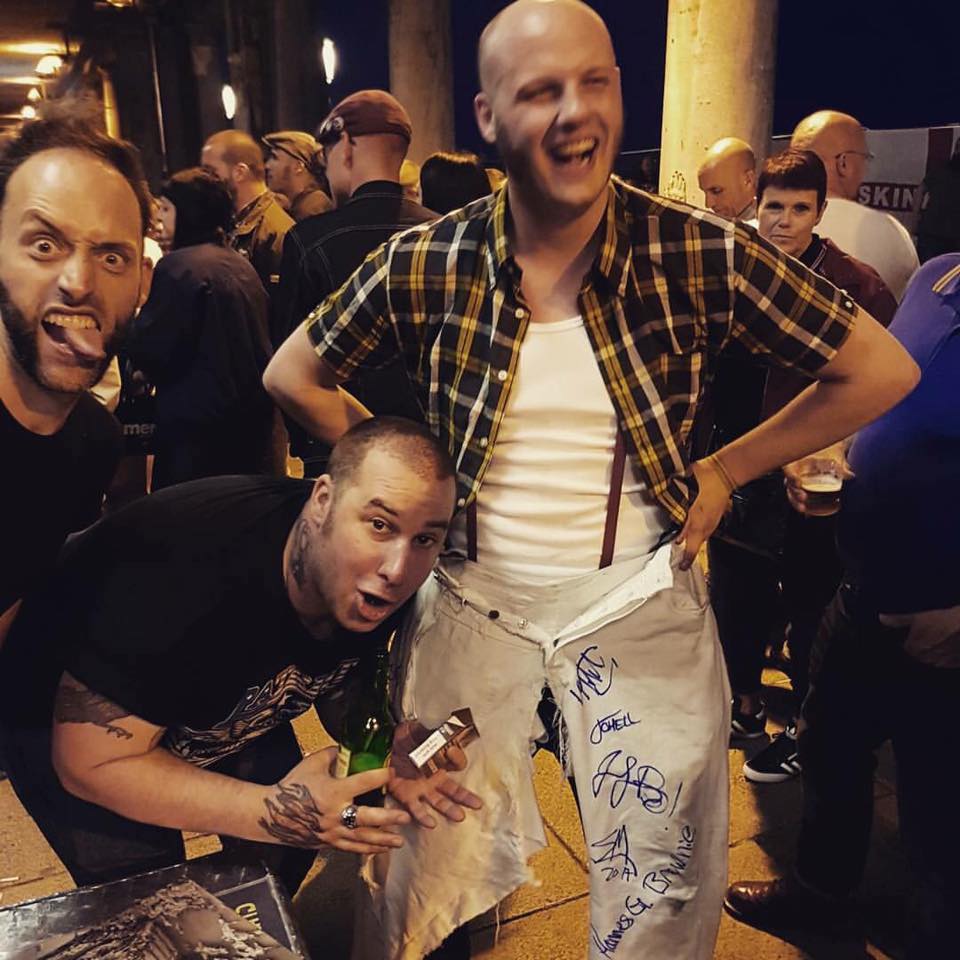 What happened to your trousers at the reunion – do you double as a stripper?

Ha ha! Well we had running bets over how I was going to ruin my white pants on tour. The rest of the band was hedging on puke or blood. I got a little buzzed during our set at the reunion and decided to try to rip them off. Problem is… they were quality Levi’s 501’s and I could only rip one leg off. So I played the last few songs of our set with a white leg cape. We all signed them and auctioned them off to some Germans. They have since been encased in a frame and are hanging in Berlin’s Hard Rock Cafe next to Nina Hagen’s panties.

What’s the most annoying thing that can be out of order? Lift? Toilet? Vending machine?

I’ll have to go with an out of order tour van. Nothing worse than being stuck on the side of the road in the desert with a smoking van. 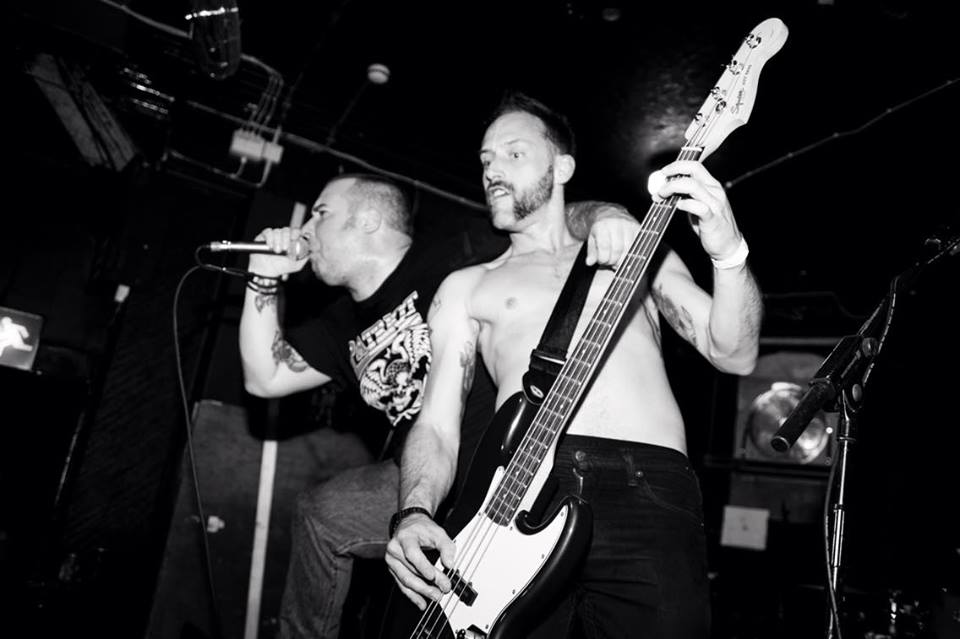 I had to google this fruitcake to find out who the hell he was, but here’s my take. I believe David Icke was involved, along with the Saudi Royal family and the Bush and Rockefeller freemason association, in actively planning 9/11. Paedophile, Satanist lizard aliens have been brainwashing us with their moon beams from another galaxy for too long. It’s time for the people to rise up and resist!

When are you inviting the Creases Like Knives posse to Canadadadadada?

I think that invitation already went out at the Reunion.

What does the future hold for Out of Order? Any words of wisdom for your UK fan base?

Well, we’ve got some new stuff coming out soon. A couple of releases planned for this year hopefully. We’re working on a few tours, but I don’t want announce anything yet as we are still working things out. We’re going to write, though, that’s for sure. We’d love to come back to England. We had so much fun with all you guys when we were on our UK tour. The hospitality and love shown to us over there was amazing. This is what we do this for. The spirit is alive and well there. Don’t change a thing, England!

2 thoughts on “Lord of the jeans or: why Scott Maracle is Out of Order”