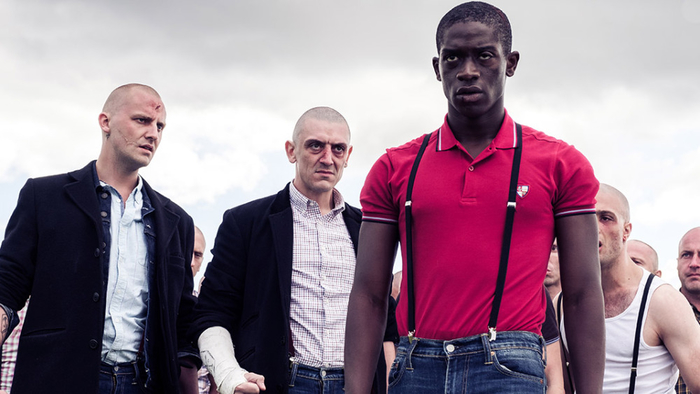 Farming is the latest skinhead movie, even if it feels more like one from the 80s or 90s. Based on writer-director Adewale Akinnuoye-Agbaje’s youth – very loosely, I should imagine – it tells the tale of a Nigerian boy named Enitan, who is raised by British white working-class foster parents in Tilbury. The friendless Enitan is brutalised by a gang of racist local skinheads. Since he can’t beat them, he joins them. But his ordeal has only just begun, as he becomes both victim and victimiser. While continuously receiving racist abuse, he doles out beatings to other non-whites in a bid to gain acceptance from his ‘friends’. 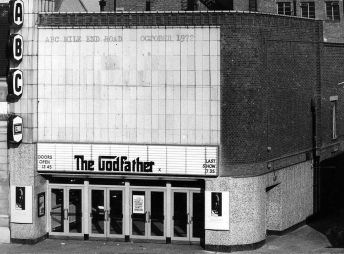 We had the privilege of attending a special screening of Farming at the Genesis Cinema in Stepney. This is where in November 1970, princess Anne went to see Bronco Bullfrog after being publicly pressurised by some of the local kids who appeared in the movie. Back in those days, the place was called the ABC Mile End.

Let us spill the beans straight away: in terms of authenticity, the cartoon skins who populate Farming make Romper Stomper look like Bronco Bullfrog. Quite a bit has been written about the notorious Tilbury Skins (aka Tilbury Trojan Skins), including in George Marshall’s Skinhead Nation (1996), and of course in a 1980 article in The Sun, which, as some of the kids rather articulately established on a BBC Radio programme, had framed and misrepresented them.

Farming director Adewale Akinnuoye-Agbaje has certainly googled all of this. The problem is that he can’t seem to tell plausible information from Sun fiction. He did memorise that Tilbury Skins, while casually racist – albeit towards “Pakistanis”, as they themselves stated on the BBC Radio show – weren’t nazis. Nazism, after all, is something German, which is hard to stomach if you derive part of your nationalist identity from Britain’s Finest Hour. Farming makes a point of this when its main character’s stab at sieg-heiling prompts an angered three-sentence lecture on Britishness.

But, as the skins credibly recounted on BBC Radio, the Sun ‘reporters’ plied them with booze and even brought a Union Jack along, ready to adorn a bare skinhead torso as the “bragging, brawling bunch” of “cropped rats”, as the paper later dubbed them, posed for the camera. Farming freezes this staged image: the fictional skins grimace all the way through the movie like a pack of morons, while one of them wears a Union Jack over his shoulders. That’s right: he isn’t going to football or to a National Front march, he just likes getting his top off and wearing flags – including to the pub.

Things take a bizarre turn when the ‘skinhead boss’ is seen lounging at the local, calmly stroking a boa constrictor wrapped around his shoulders like a mafia godfather or Bond villain. Artistic licence, I suppose, but still an eccentric way to portray an 80s skinhead from Essex. The actor, John Dagleish, who was 37 at the time of filming, looks 40 plus, as do some of his fellow Tilbury Skins. In reality, 18 would have been the average skinhead age at the time. Urban legend has it that Tilbury Skins boasted a few leftover ‘originals’ from the 60s. Even if that were true, that would still make Dagleish a decade too old.

Creases Like Knives wouldn’t be Creases Like Knives if we didn’t have some sartorial grievances to boot. The skins in the movie do seem to wear Levi’s, but that’s as far as it goes: they’re modern-looking, low-waisted skinny jeans. Because they’re so low-waisted, the Ben Sherman shirts won’t tuck in properly, leaving a bulge of material to billow awkwardly around the waist. And if Akinnuoye-Agbaje was a skinhead himself, did he not remember that skins didn’t start wearing skintight jeans until 1983 or so? A trip to Levi’s Vintage Store off Carnaby Street would have been enough to rectify such ill-advised costume choices.

This doesn’t compare well with, say, This Is England, which only prompted top-button related complaints in our ranks when it came out 13 years ago. But there are other, less shallow aspects that are worth considering. What This Is England got right was that the skinhead world, much like the world at large, has always been a bit contradictory. It was never simply the good guys vs the bad guys, or – forgive the pun – black and white. It is true that part of the skinhead scene degenerated dreadfully. But anyone who has ever been around right-wing racist skins will know how inconsistent they are. On their own, they can be the sweetest people – including when you’re an immigrant, leftist, or whatever else they think they hate. The moment they’re with their mates, pissed-up, or both, it all changes.

It would have been good for Farming to flesh out such contradictions in its skinhead characters – or in fact, lend them any depth at all. Instead, we’re treated to a bunch of continuously nasty mumbling cretins, who all appear to based on Dim from A Clockwork Orange (even Romper Stomper contented itself with only a couple of supporting characters based on him). The gang’s uncharismatic leader, Levi, remains thoroughly one-dimensional too. There doesn’t seem to be another side to him apart from the one we encounter in the first few seconds. Frankly, humans aren’t like that – not even the most vicious among them.

The racist violence and sadism are bleak and very hard to take, especially during the first 45 minutes or so. This is where Farming could have succeeded: by making us feel the impact of white racism, reminding us how present and pernicious it was in British society not too long ago, and how ‘a bit of bovver’ sometimes meant that you ruined somebody else’s youth or life. Sadly, the relentless violence and racist humiliation start wearing thin after a while. They become too much. They aren’t counterbalanced by anything. Eventually, the non-stop bombardment blunts our senses to the point of deadening our empathy.

What’s more, the storyline goes over the top until we stop buying it. The main character, Enitan, stabs somebody and burns someone else alive with a Molotov cocktail. Life-altering injuries or death would have been the most likely results in the latter case. But Enitan gets off with a slap on the wrist. In fact, he is offered a three-year law course to help him change his ways. Akinnuoye-Agbaje wants us to believe this really happened – to a black kid in the 80s.

All of the above raises a big question: did the writer-director really run with the Tilbury Skins? Over in the Mod to Bootboy: 1958-1974 Facebook group, someone claims that he went to school with him: “He wasn’t a skinhead at all, he was a mod”, he writes. Perhaps unsurprisingly, some Tilbury Skins now active on the revival scene aren’t too happy with the way they have been portrayed either: according to them, Adewale’s story is “complete bullshit”.

I was cautious about such comments at first. People are partial to whitewashing the past, and at the end of the day, it’s all He Said, She Said – so who knows. However, given the writer-director’s apparent lack of insight into the nature of skinheads, never mind human nature, I am far more inclined to believe the “bullshit” theory now that I’ve actually seen the movie. Has anyone come forward to confirm Akinnuoye-Agbaje’s account yet? With such an extraordinary story, you’d think someone might remember him.

While remarkable, his ‘true story’ isn’t unique. There have been real-life cases of conflicted black kids joining white supremacist gangs. In the late 70s, Hamburg’s punk scene was terrorised by a gang of nazi punks calling themselves Savage Army (SA), who later became the city’s first racist skinhead crew – as it happens, that mob was led by a pair of mixed-race twins. It has been said that some of the people who Cass Pennant drank with were also some of Skrewdriver’s core audience in London – as a child and youth, Cass had experienced persistent racist bullying. In the US, there have been some well-documented cases of ‘black boneheads’. And so on.

In Farming, we’re offered the obvious pop-psychological explanation within the first 15 minutes: racism breeds self-hatred, which is then acted out on others. No other ideas or reflection follow thereafter, as the movie basically turns into a violent spectacle. There’s a tacked-on ‘aspirational’ ending, but how did Enitan – or Akinnuoye-Agbaje, for that matter – manage to overcome his issues? We never learn. It’s unfortunate that Farming has so little to say about its intriguing basic premise. It’s even more unfortunate that the director thought himself fit to provide the godawful rock score, including a ‘ska’ tune that sounds like a holiday camp entertainer covering the Kaiser Chiefs. He would have done better to consult Tilbury’s resident Oi band, the immortal Angela Rippon’s Bum, instead.

While Farming teaches us nothing about racism that we didn’t already know, its 1980s schlockbuster portrayal of skins simply doesn’t cut it in 2019. There’s also a tension between its self-serious tone and the fact that it offers more sensationalistic violence than insight. For a better movie, watch The Believer (2001), the ‘true story’ of a Jewish neo-nazi skinhead from New York City. Although its cultural and religious references are a bit obscure to non-Jews such as myself, it treads similar territory while being more thought-provoking.

And if you want to find out more about the actual Tilbury Skins, listen to the embedded BBC Radio programme, or watch them in 2013 in the documentary below.