The Press were one of the USA’s earliest Oi! bands. Broadly sympathetic to the now thoroughly discredited British Trot-lite cult, the Socialist Workers’ Party (lite on political theory, heavy on bureaucratic maneuvering and building unpopular fronts), The Press didn’t have it easy in NYC’s right-leaning HxC skinhead environment.

Often, their shows were purposefully ruined by meatheads in much the same fashion as British Movement gangs had prematurely ended Sham’s career in the UK. Nonetheless, The Press soldiered on and, by the late 1980s, proudly nailed the colours of the original SHARP chapter to their mast.

While vocalist Andre Schlesinger wore his politics on his sleeve, The Press didn’t churn out straight agitprop, but were quite capable of writing great punk songs about working class life in New York. In contrast to today’s Nazi-obsessed RASH bands with their dull, one-dimensional antifa crap, they were a credible skinhead band with a genuine socialist edge.
Crombieboy

The Press’s only full-length record was Punks and Skins, Vol. 5, a split with The Radicts on Roddy Moreno’s Oi! Records, while the The Complete Press 1984-1994 compiled everything they had ever recorded.

The interview below is excerpted from the first issue of Double Barrel #1 (May/June 1989), published by SHARP-NYC, transcribed 1/98 by Dan Sabater. The Press were interviewed April 22, 1989 at Giant Studios, New York City. 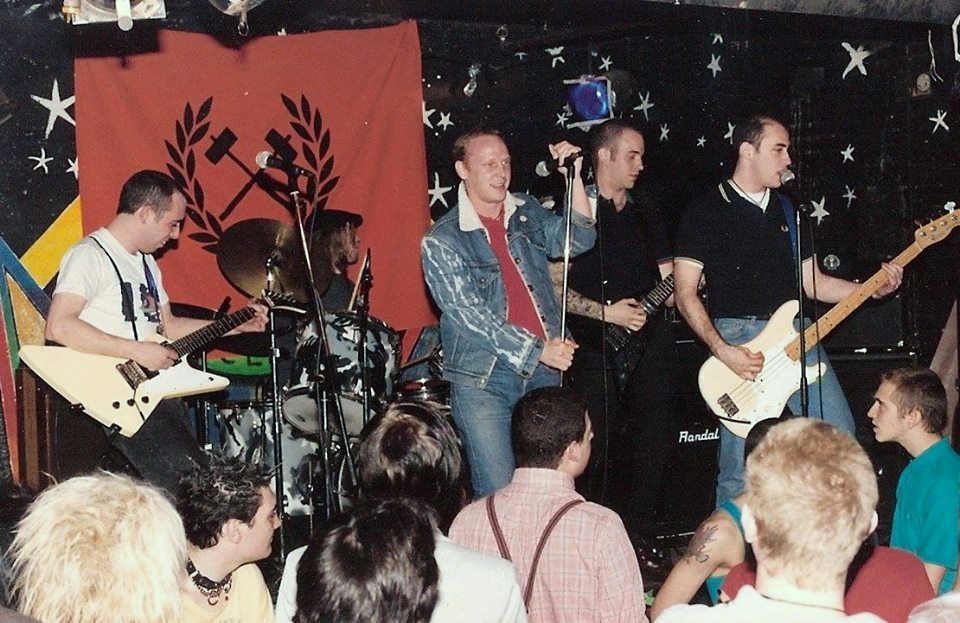 DOUBLE-BARREL (DB): Let’s have a band bio. From day 1 to present

AN: Back when I was in Montreal there was a large Oi!/Ska scene and I was hanging out with the Skinheads up there and getting in on their scene. Bla Bla Bla. I had been hanging out with Skinheads in NY and it was really kind of nowhere as far as the Hardcore scene (don’t know about that!-Dan/LARIOT). The only Ska scene was sort of centered around the whole Mod thing. So “I Had A Dream” that I could form New York’s one and only Oi! band.

DB: When was this?

AN: This was back around 1984, something like that. That’s back when I started putting up PRESS stickers (Jackhammer skins w/crossed hammers and torch).

DB: How did you come up with the name?

AN: At the time I worked in a factory as a power press operator.

DB: Who was in the original line-up?

AN: It was me on lead guitar and vocals, Jimmy on Bass and Bob on drums. That was the original line-up of the PRESS. We recorded “Just Another Warning” with that?

AN: Oh, right. Jim was in the band before that but he quit and was replaced by Giddian Greenburg and we recorded “Just Another Warning” for the MOON RECORDS? “N.Y. Beat” comp. With the TOASTERS and all those other bands. Giddian was booted out and I crawled on my hands and knees and asked Jim to come back because we needed a harder unshaped touch. Then we recorded 3 songs for this drug-addict engineer and sent it to Oi! RECORDS but since Roddy thought we were a Mod-band he didn’t want to release us. The engineering was real weak. When the guy mixed it he left no rough edge at all to it. When we play live we have a big rough edge, it sounded too clean. It was produced by Rob Hingley (Bucket of the TOASTERS) too and that probably had a little bit to do with it.

JIM: The band’s been around for a long time now like about 4-5 years or so but we never played any shows or nothing because we didn’t have our shit together when it came right down to it. Once we found the right people we started playing gigs, everything happened.

JO: Me and Jordan!

DB: When did you start bringing other members into the band?

AN: We started playing shows about a year ago and that’s when we started getting extra people. We had our first outside guitar player. We played our first show on I think Feb 18th?

AN: At CBGB’s at a fucking “Scum-rock fest” (booked by TC?- Dan/LARiot) and we were the best band.

DB: How did the punks react?

AN: They were shocked at our cleanliness (laughter) and our playing ability.

DB: What did they think of a skinhead band at a “Scum-rock fest”?

AN: I guess that because of the image of the rest of the Skinheads in New York City they probably thought we would be typical but when they realized that we were cuts above the rest and they were very taken back.

DB: OK. John when did you get in the band?

ROB: Wait, I’ll tell you how John got in the band. One Saturday Jim and I were hanging out drinking some beer and listening to tapes of my old band (I was in a band with John). And Jim really liked it so we called John up at like 2 in the morning and asked him to rehearse.

JO: About three years ago we (Rob and John) were in the same band called SDP (NY Hardcore).

AN: As a matter of fact, that’s where I met Bob and I met John even before that.

DB: Jordan seems to be the “late-comer” to the band. When did you come in?

DB: Why a second guitar?

JO: Every band I’ve ever been in I’ve always been the only guitar player and I was never into playing with 2 other guitars ‘cos you’re always fighting over who does what but we decided that we wanted a guy to play strictly rhythm so it doesn’t drop out when we go into lead breaks and so the sound would be much thicker. The first time we played together we sounded great.

AN: We wanted that steam roller sound. That’s what we got.

DB: You sent the tape to Oi! RECORDS, Roddy heard it, then what?

AN: Roddy heard it and he liked it but he thought we were a Mod band?

JIM: He just sort of forgot about it. Then when he came over here, he heard us and saw what we were all about. Y’know, he liked it and then he heard the RADICTS and he said to “send a tape and I’ll put out a record”.

DB: Did you know Roddy before that?

AN: We met him through Rob Hingley of the TOASTERS. And he said he wanted to get him off his couch so I sent him to the RADICTS. Then he left 3 days later. He missed his wife.

DB: It’ll be “Punks and Skins Volume” what?

DB: Coming out when?

AN: It probably won’t come out till June now.

DB Note: It seems that customs is holding the tapes at the airport because there is a thousand dollar insurance policy which leads them to believe that there may be something of value which may be resold over-seas, which is highly discouraged)

DB: Let’s talk a bit about politics. I know you’d rather not but, There is a rumor (mostly amongst Boneheads) that the PRESS is a “Commie band”. Has it kept many people away?

AN: Well it hasn’t kept too many people away because we’ve had a lot of people at our shows. And if it keeps the Boneheads out then I’m happy. (The band agrees)

AN: We’re not a political band. We’re not making a political statement. I might make my feelings known in certain songs but I don’t see them as being big statements or anything.

JO: I think it’s the old drawback on because we’re different then them then we’re “Commies”.

AN: Yeah, we’re not out bashing “faggots” and Y’know, all this white power shit, so we’re soft. Then when they see us they realize that we’re not soft so what are they gonna say? Oh “They’re Communists, They’re Stalinists” and we’re pressing this shit on people. I’m the only one who’s into Socialism or labor politics or anything like that (in the band). I don’t think these guys really care.

ROB: Or know what it is (laughter).

ROB: And we support the most capitalist company in America (holding up a bottle of Budweiser).

DB: What are your musical interests (outside the band)?

AN: The musically better Oi! like COCK SPARRER, the UPSTARTS, the TOY DOLLS I like ‘cos they make me laugh.

JO: These guys named all the bands that we are influenced by, but outside of the band influences range from Motown, early Ska?

AN: A lot of early Ska. A lot of TROJAN hits.

DB: You mention Boneheads and White-power skins. I know you’re involved with SHARP. Let’s hear a bit about that.

DB: How do you (as a band) see the Oi!/Skinhead scene going?

AN: Every show we play we see more Skinheads, more punks, more “Regular” kids who are just into being kids. More SHARP members, more from other anti-racist organizations coming to the shows. Interest from record companies, the whole deal, It’s just getting better.